Mary Elizabeth and I have been back in the country for three weeks -- long enough to...  attend a best friend's wedding in WNC; visit my herb-tea-farming buddy, Rachel in Virginia; catch sunrise on the Brooklyn Bridge; go berry u-picking with friends and put my overalls to work shoveling at a community garden in the Philly area; participate in a fellowship at the Wake Forest Food and Faith Conference in Asheville, NC; blur through Jacksonville for my wife's high school 10-year reunion; and stop in Tallahassee long enough to learn about the iGrow Southcity Grand Opening happening 2:30pm, Friday, June 26th. Folks, we've been on the move.
But what about Europe? We were there for two months. Other than good, seemingly untainted bread, what stood out?

There was this coop in Spain... A network of coops. THE COOP of coops! I gotta tell you about it. 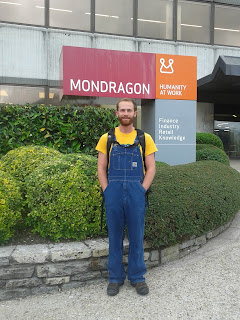 It's called Mondragon. It's a "federation of worker cooperatives" based in the Basque (NW) region of Spain. It's comprised of 101 worker-owned cooperative businesses that pulled in 12 billion (yes, that's a B) Euros last year. They have 75,000 employees, most of whom are worker owners. Though there are coop model parallels with our local Bread and Roses and New Leaf, and coops in Nicaragua, this is a whole other ballgame. Our visit blew my mind!


With support from a local priest, they started with a worker-owned stove factory. In the aftermath of the Spanish Civil War, there wasn't a lot of capital to go around, and a local source of jobs in the Basque region, the stove factory was closing shop. So, five workers put up the initial money and, essentially, crowd-sourced (or "community-sourced") the rest to buy and reopen the factory. From that beginning, they've developed all manner of cooperatives.

They've got a bike manufacturing coop, a medical supplies coop, a restaurant industry supply coop, auto-manufacturing machines coop. (They make the tools that Detroit uses.) There's a cooperatively owned bank, an insurance coop, a dairy coop, a rabbit meat coop, a hydroponic vegetables coop, a cleaning-service coop, and a construction business coop. Not to mention research coops, and a university coop -- all, mind you, based in a small town in rural Spain.

The coops practice networked-resource sharing. Let's say one of the (fully autonomous) cooperative businesses is in short-term cash-flow trouble. Say they've got a major order coming down the pipe in 4 months, but for the next 3 months, they're going to run 20million euro short of meeting payroll. Rather than close shop, they call up one of the other coops and say, "Could we borrow 20 million euros for the next three months?" No problem. When there are downturns in particular businesses, the worker owners are reallocated to other coops in the network. They haven't had to lay off a worker-owner in 60 years. They trade knowledge and partnerships. They combine leadership development and training efforts.


One of the coops is Mondragon Services Coop. This is, essentially, "Headquarters." They have 60 worker-owners on staff. Total. 75,000 employees, and they've got 60 worker-owners in headquarters! Wrap your mind around that. Their job is coordinating the networked resource exchanges amongst the coops. Ultimately: they facilitate relationships. Also, they're charged with catalyzing new cooperative enterprises and spreading the cooperative model.  They do what Tallahassee Food Network does at the scale of 12 billion euros annually. All the Mondragon coops pay 10% of pre-tax profits into a fund to capitalize* future coops.  (*Mondragon invests approximately 300k-500k euros for every new job they create; more on money later).

Another innovative aspect of Mondragon's coops are their leadership structures. This is where the parallels with US consumer coops or traditional farmer coops end because the former coop examples are typically single-side coops. (That will make sense in a second). All Mondragon's coops are ultimately lead and controlled by whoever are the major stakeholders (not stockholders) in the business. So, for example, their grocery store coop, Eroski (one of the largest grocery chains in the country) is lead by a team of 8, 4 worker-owners and 4 customers members. These eight are elected by and answer to the Eroski general assembly, comprised of 250 worker-owners and 250 customers*. How do you make a bad business decision when the workers AND customers are both at the table? And did I mention power is divided between them 50/50!? They HAVE to reconcile differences. They HAVE to develop business models and practices that work for everyone.  (*The customer delegates predominantly are drawn/elected from 20-member customer-advisory councils that every Eroski store has).

Or take the university coop as another example. Their decision power is split three ways: 33% worker-owners, 33% end-users (in this case, students), and 33% community collaborators (such as business, government, and community-organization leaders). The institutions that desire skilled work forces are at the table with students and the people teaching and cleaning up after them. Organizational direction, spending priorities, and financial realities are faced in partnership. Imagine how things might shift if FSU and FAMU's boards of directors were so comprised?


The last thing I'll share for now are a few notes about Mondragon's relationship with money. Our host, the director of "cooperative diffusion" explained to us that in traditional capitalism, money has the power and labor is viewed as a factor in production, i.e., a tool to achieve the purposes of capital. In cooperativism, labor has the power and money is a tool used to achieve labor's purposes. (*It's a major flip from our way of thinking; however, lest someone throw me on a red-bangwagon: cooperativism is not communism. Communism is where the state owns the means of production, controls the economy and employes both labor and capital as tools to accomplish its own goals under the auspices of empowering its people.)

So, if money is to be leveraged as a tool to achieve the dreams of workers, where does their seed money come from?  Themselves. Always. When you start working in a Mondragon coop, the first year you are a "temporary" worker. At the end of that year, assuming you've got good reviews and you're interested in staying on, you've got 5 years to invest a years' salary in the company. It's a 15,000 euro pricetag to become a worker-owner. So, you've got to "cough." But granted, minimum wage in Spain is 9,000 euro, so you're more than 150% ahead annually compared to your typical starting job. Should you chose to bail, the coop keeps a 3,000 euro "entrance fee."  So why join? Because the average rate of return over the past 60 years has been 4-7%, so your ownership investment will grow substantially-- and because membership is ownership, ownership is power. And, in this way, they say, "Everyone is an entrepreneur."

I could go on, but I've long since lost most readers. If you want to learn all kinds of nitty gritty, check out this powerpoint. Also, you should know that Evergreen Cooperatives is a US-based coop network modeled after Mondragon that's expanding rapidly in Cleveland.

~ ~ ~
Just know that I am dreaming dreams.  I dream of agricultural coops, food processing coops, micro-finance coops, healthy corner store coops, food education coops all networked together for the sharing of resources, ideas, & people. And I'm reflecting on the models in N FL that are the seeds, roots, and saplings of our own scaled up future: TFN and its iGrow, Red Hills Small Farms Alliance, Seed Time Harvest, N FL Culinary Incubator, the Slow Food Farm Tour in Jax, New Leaf's expansión to Bradfordville, Frenchtown Heritage Market, the North Florida Cooperative, the NE FL Community Garden Network, Compost Community and all manner of other pieces.

May your WILDEST dreams grow into being,
Nathan

Oh, and a food garden tip. Summer's upon us, so it might be time for you to transition to the next crops: