It tells the story of how folks are "taking things into their own hands and backyards" by starting more and more gardens in 2008-- a year before, mind you, 2009 when the sale of home vegetable garden seeds jumped over 30% by some sources. According to the CNBC news report, there were 25 million households with home vegetable gardens.

Now is as good a space as ever to mention briefly the outrageous economics of food-gardening. As the news report mentions, a large tomato at 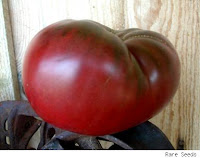 Whole Foods cost $3, and a package of tomato seeds in the same produce section cost $2.50. "So even if only one of these seeds turns into a plant," the reporter states, "then I'll have tomatoes all summer long." Okay, fine, but we don't have a Whole Foods in Tallahassee nor do most folks shop for organic produce. More and more folks buy organic, granted; the majority, however, still do not. So let's talk about Winn Dixie instead.

I checked the ads in the Democrat this morning. Winn Dixie was selling tomatoes for $1.69/lb. So, the same giant tomato at Winn Dixie would have cost roughly $1.50. A package of seeds from Gramblings on S. Adams St, 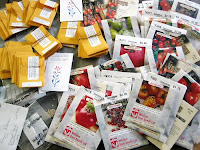 on the other hand, typically cost .95 cents. But of course, we're not comparing a mere pack of seeds with a single tomato. It's more complicated than that.

Say you start your seed in a little tray. That's a buck. And, of course, with a seed tray you'll need some potting soil. That's another five bucks. Maybe you buy four pounds of fancy organic fertilizer for eight bucks. Plus, perhaps you even hire me to deliver a DIY raised-bed vegetable garden kit. That's another $100. Add that up. We're at .95cents for the seeds, a dollar for the tray, five dollars for the potting soil, eight bucks for the fertilizer, and $100 for a DIY raised-bed you still have to assemble: $114.95. So, now you're looking at that $1.50 tomato thinking, "Maybe it was worth it."

Do you know how many tomato plants can grow from a packet of seeds? Neither do I, but it's somewhere in the vicinity of "Whoa, what am I going to do with all those?"

They won't all fit in your raised bed. But ten of them easily will. With loads of space left over. Truth is, in a 4x10 bed, you could fit between 12-18 tomato plants without a problem. And with decent sun, each plant can produce between 8 to 15 pounds of tomatoes.

So, lets take the low estimate on both those numbers: 12 tomato plants x 8 pounds/plant. That's 96 pounds of tomatoes. With that many tomatoes, you'll have to start giving them away before your family breaks into a Tallahassee version of the Spanish Tomatina.

But wait; we're not finished. Ninety-six pounds x $1.69/lb at Winn Dixie... and you will have raised $162.24 worth of tomatoes. If you're paying attention, that's $47.29 dollars worth of tomatoes over and above the cost of seeds, supplies, and your Tallahassee Food Gardens raised-bed.

One more thing: have you ever HAD a homegrown tomato? When it comes to taste, all I can do is agree with John Denver. "There's only two things that money can't buy. That's true love and homegrown tomatoes."

Of course, fall is on the seasonal horizon, so it'll be months before you can plant tomatoes. Now is the time for greens like collards, kale, cabbage, chard... and turnips, onions, carrots, radishes, and snap peas. But, the gist of garden economics are the same spring or fall.
Share Share on Facebook
← Back to MAN IN OVERALLS