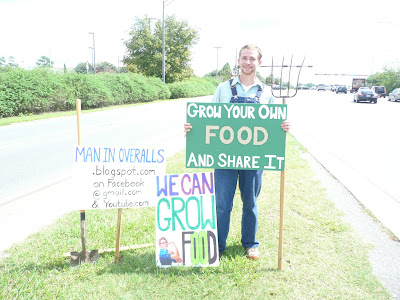 Monday through Friday this week, I spent hours-upon-hours on roadsides in Tallahassee clad in overalls, holding an upended pitchfork in the vein of the "American Gothic" painting. I simultaneously held signs with catch-phrases about food gardening like, "Grow Your Own Food and Share It" and one with a picture of Rosy the Riviter that said "WE CAN GROW FOOD." Another one, an infomational sign refered people to this blog, "Man in Overalls" on Youtube, and Man in Overalls' Facebook fanpage. Yet another one read, "HONK! for Food Gardens."

On Monday around lunch time I wrote: "I made my roadside debut this morning. It was a stunning success. I connected with all number of folks that I otherwise would have not had access to. I remained shocked by the numerous honks, waves, fist pumps, smiles of humor, and quizzically-puzzled looks aimed my direction."

I also remained impressed by the sheer quantity of passing vehicles. I kept tabs on traffic flow and the length of my roadside stunts. By the end of the week, over 19,000 vehicles had passed by with enough sight distance to see the Man in Overalls. Of the 6,717 or so cars that passed by on Friday when I was holding my "HONK for Food Gardens" sign, over 10% of vehicles honked. That's over 670 honks in one day. That's more than one in every ten cars. And that's not counting hollers, waves, nods, fist pumps or red-light conversations. There is a lot of excitement about food gardening.

Gosh. How do I even begin to communicate the eclectic experience of roadsiding in overalls? What do you want? Humor?

The first day, a lady pulled up at a red light and asked, "Young man, who pays you?" I laughed. 'Course, that's part of the whole idea. "For standing out here?" I asked; "No one," I replied. I guess I should have given her a business car and said, "I'd let you, if you wanted to..." Alas. I didn't. Let's just say, I'm still getting my "Salesman" act together.

The second day, up on Thomasville Rd just north of 7th, a man nearly jumped out his driver's window with a camera. As he swerved by he yelled out, "It for my blog!"

Wednesday afternoon, I met a guy named Kieth. He came walking down the N. Monroe sidewalk around 5:30 dressed in white painter garb. He'd just gotten off the bus-- a full mile before his stop becuase the driver had told him it was broken down. "But look!" Kieth pointed out, "There goes the bus now." And, indeed, it drove past. "Whew. It pissed me off, that did. And I needed someone to talk to, and here you are. So, I guess it works out."

I smiled, said, "Yep. Perfect. Indeed. Here I am," and I continued offering two-fingered waves to passing vehicles.

About that time, we exchanged names, a handshake, and then he was off to the races telling stories and sharing little pieces of his life. He'd just finished a job re-painting all the doors in the Country Club Housing Project. The next day, he was headed for Joe Lewis. Turned out, he was also an artist; he drew exquisitely with pencils. He shared one drawing with me that depicted a sea-scape complete with a frigate, waves, cumulus clouds and exotic vegetation all along the shore. Every plant was chosen either for its botanical rarities or was a imaginary synthesis plant of two or three interesting species about which he knew all kinds of details. In the forground, the focus of the image, there was a flower which he'd drawn using three different techniques. Cross-hatching, air-brushing, and regular shading, he informed me. It was truly a work of art.

Kieth was also a musician. After putting the drawings away, he pulled out his harmonica and muttered to himself, "Now, how's Neil Young's 'Harvest' go...." With a few introductory notes on the harmonica, he sung it through without a missed beat. Then he offered to play requests. "Know any Johnny Cash?" I inquired. So he did "...shot a man in Reno."

Like this guy Colin I met on Tennessee Street who crossed the road, camera in hand. "Can I take your picture?" he requested. "Yeah. No problem. Want me to rearrange my signs or anything?" I responded. He didn't. He clicked the photos, and then stood up. I asked, "So... what are you up to?" as if he was the person doing something unusual. He stammered. "...I mean," I continued, "with the picture? What are you up to with the pictures?" "Oh," he said, "I work at a law office just over there." He pointed in the direction of Franklin Ave. "The people in my office, we're big supporters of yours."

How do you respond to that when you daily stand beside the road in overalls brandishing a pitchfork? Really?

Instead I asked, "So... are you growing anything this fall?" Come to find out, he's getting married in two weeks, and he and his future mother-and-law are discussing the possibility of buying a little bit of land-- "out east of town"-- to grow a bit of their own food. Food dreams. I love 'em.

On the roadside, I've seen all kinds of people and heard all kinds of nonsense. The first day out, I saw two or three of my neighbors, one of my sister's ex-boyfriends, an elementary-school friend, and a board member of the Damayan Garden Project. On Tennessee, a boy at Leon yelled across the street, "CHECK YOUR EMAIL!" Three times during the week, I saw an old high school buddy named Meg. I saw my pastor and a few other folks from my church. Friday on Apalachee Pkwy a lady studied my signs very carefully and then tried to offer me $2. I gave her my business card instead. And I swear a group of high school girls drove by and then circled back around to tell me, "You know you're adorable, right." I laughed.

To wrap things up, I'll share that repeatedly folks asked me some version of "What are you promoting?" or "advocating?" or "doing?" They want a soundbite. Here's the best I've got so far: "Food Gardens. I'm just trying to pay my bills and get some folks growing food so we can eat well in Tallahassee. In other words, I'm planting vegetable gardens, fruit and nut trees, and/or teaching other folks how to do it themselves."

And generally, as I told Christine, the Damayan board member, I'm trying to "Create a buzz about food gardens."
Share Share on Facebook
← Back to MAN IN OVERALLS