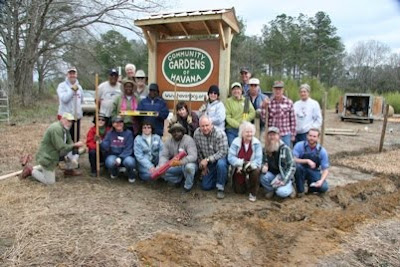 This past Saturday, I spent the morning hours at the first Havana Community Garden workday.  In the course of four hours, we ran 100 yards of "hog" fence along the highway to provide enclosure for the garden property; set posts and fenced the garden plot area to keep out rabbits, painted a white-picket fence, built a compost holder, erected the beautiful sign, and had a laughing good time.
I spent most of my morning working with Mr Lynn Coulter and Thaddius.  We ran the hog fence together.  Amidst "sureing-up" the fence ends, pounding posts in the ground, running and tightening the fence and then clamping it to the posts, I got to know the two gentlemen rather well.  Mr. Coulter is an older gentleman who started out his career as an agricultural extension agent in Iowa.  After several years at that, he went back to school to study Agronomy (don't worry, I had to look it up too: "the science and economics of crop production").  Then, he traveled the world advising companies and governments in agriculture.  A while back, he moved to the area in order to teach soil science at FAMU.  And now, retired, he is one of the central leaders for the community garden.
I actually worked more with Thaddius.  He and I hammered in the fence posts.  After he'd done about ten while I held them straight, I realized my laziness and took a go at it.  "Whew," he'd said, "That really gets your arms."  Surely he'd be exaggerating.... Nope.  After two or three, I was intentionally breathing to help my arms out.  He took the post pounder back from me.  And so we traded back and forth every two posts the rest of the way down the highway.
As we worked I learned pieces about Thaddius. Born in 1973, he is twelve years my senior and has been married for ten years.  He was born in Havana.  At ten, his family moved to Tampa for many years.  Then they all returned.  He has a landscape business and a I-come-to-you auto-detailing business.  Thaddius had come to Saturday's workday because one of his clients suggested he stop by.  He's a member of Salem Methodist and I swear he knows the whole town because he waved to nearly every other passing car.  He claimed, "They go to my church."
One more thing about Thaddius: When he found out that anyone could get their own plot, that plots cost $30/year, and, lastly, that there were only three left available, he set down his hammer with the words, "I'll be right back."  He tracked down Bob Bruggner-- one of the lead organizers for the garden-- and secured his claim to a plot.
By the end of the day, all the plots were taken.  Thirty-eight in total.
So what about this garden?  How'd the idea develop into its current reality?  Well, according to a fantastic lady named Deborah--one of the leaders and responsible Saturday for the peanut butter and jelly-- it started in Bob Bruggner's head.  He wrote an article in the paper about the idea for a community garden, and from there some folks got in touch with him about how they could and should "make it happen."  A few folks offered a hundred dollars each as seed money; the garden club donated several hundred dollars, and donations continued to trickle in.  But that's just the money.

Things really gelled when Bob and company, including the Havana's city manager and a food pantry (or bank?) leader all took a field trip  to visit Apalachicola's City Square Community Garden.  They were received by Karla Ambos, one of Apalachicola's central garden organizers, the city manager, and one of Apalachicola's food security leaders.  From there, the Havana folks-- with their questions answered and a garden model from which to develop their own--went into high gear finding land, making decisions about plot size, subscription fees, hosting community meetings, placing a temporary sign, and receiving calls of interested would-be gardeners.  Along the way, a family offered the land where the garden sits, and the city installed the water system free of charge.  As the Havana organizers prepared for the workday, Stone's, Havana's seed and feed store, sold supplies at cost.  Because of in-kind donations, the garden budget up to this point is only at $1700.  There are more meetings and a dedication scheduled for March the 13th, but the garden is open for community.  Plot holders are welcome to come start planting

Okay, one last piece. How's this for small-world?  Bob is married to a woman named Betsy.  I know her as Mrs Bruggner because she was one of my teachers at Hartsfield elementary in second grade.  She was at the workday.  And so was a man named Gil, one of my teachers in high school.  He's retired these days.  He was on the crew that erected the permanent sign shown in the picture.  Gil got to laughing about some mis-measurement of the sign, and I, jokingly, called him out : "Gil!  What do you think you're doing?  Don't you know this is a workday?!  What's this laughter about?"

"When you're retired," he said, "Everything's a laugh."