Your cart
If I'm not mistaken, this past summer, the universities' budgets in town were struck by 95 million dollars. Add to this the collapse of the housing boom and reductions in state government spending, and what you get is a Tallahassee economy heading for hard times. In fact, for many, times are already tough. This is our current reality.

In the midst of such a financial situation, does it make sense to food garden? Is it worth it to shell out a few extra bucks upfront to either a)hire someone to plant a garden for you or b)to dig, sweat, make a run to the seed store, and plant your own garden? If money is already tight, if we're facing a tough economy, is growing food a good idea?

Think for a moment about the places hardest hit economically over the last several decades. If I had to brainstorm such a list of US cities with the worst economic fortunes, I'd name towns like Flint, Michigan, Detroit, New Orleans and inner-cities in New Jersey.

Interestingly enough, in all of these places, folks are proactively planting backyard gardens, starting community gardens, and taking strides to re-create and re-network their local food systems.

For starters, take a look at a recent article in the New York Times about Flint, Michigan: "Amid Ruin of Flint, Seeing Hope in a Garden." 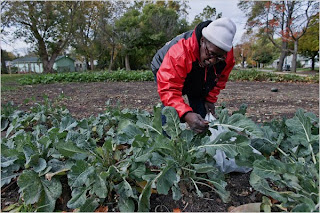 Flint, Michigan
"On one side of the fertile lot stands an abandoned house, stripped long ago for scrap. On the other side, another abandoned house, windows boarded, structure sagging. And diagonally across the street, two more abandoned houses, including one blackened by a fire maybe a year ago, maybe two. But on this lot, surrounded by desertion in the north end of Flint, the toughest city in America, collard greens sprout in verdant surprise...." read more...

Next, visit Mo-town Detroit just down the road from Flint. There, an organization named The Greening of Detroit is beautifying the city with gardens and trees... including a two acre community farm in Romanoski Park that includes a teaching pavilion, playground, and a fruit tree orchard. The farm itself is tucked in amidst a sugar maple grove, a 1-mile walking trail, soccer complex, and numerous athletic fields.

Next, consider New Orleans who continues to recover both physically and economically from Hurricane Katrina. 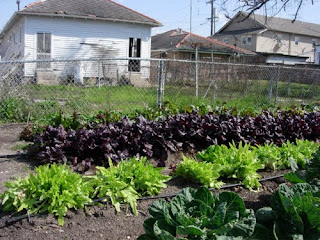 New Orleans Food and Farm Network asks the questions: "What if you only had to walk a block or two to talk with your local farmer and your kids could see where food comes from and what a “real” farmer looks like. Remember the taste of a fresh tomato just off the vine, or salad greens picked first thing in the morning for dinner at night?"

Their website is worth quoting at length: "New Orleans Food and Farm Network envisions a city where everyone has access to fresh, healthy foods. One way to get there is by increasing the amount of food grown right here within our neighborhoods. In the last few decades we have lost sight of what’s possible to grow year round in our backyards, front yards, and climbing up our side yard fences. Our grandparents knew and they produced gorgeous tomatoes, bushels of okra, eggplant, mirliton, satsumas, grapefruits, broccoli and lettuce (to name a few).

"As our neighborhoods are rebuilt the vision of more fresh food and farmers markets seems to be a common desire among neighbors throughout the city. Weekly or monthly markets are showing up everywhere. What’s missing is the army of farmers needed to support the rapidly growing demand by chefs, retailers and consumers for local fruits and vegetables. "The Food & Farm Network recognizes this gap. For the past 6 months we’ve been talking with the handful of farmers currently growing in the city to see how we can support them in their efforts to turn their sites into models and the farmers themselves into mentors for the next generation."

Which is to say that folks in New Orleans-- in the midst of their continual recovery and economic hardship caused by 2005 Hurricane Katrina-- are strategizing to re-create their local food system.

Finally, Brick City Urban Farms is working in Newark, NJ. They grow veggies using the SPIN Farming (i.e. Small Plot INtensive farming) method on concrete and chemically contaminated vacant lots using Earthboxes. To read up on their work and to get a primer on SPIN farming, click here. Or, just watch the Youtube video below.

To wrap up, in times of continued economic stress, residents and organizations in Flint, Detroit, New Orleans and Newark are growing food for local consumption. The lesson, it seems, is that a rediscovery of our food raising potential makes sense when our wallets are thin; i.e. it's a good idea to start a garden.... right about... now.

(Okay, here's why: In a 4x10 raised bed, you can grow the equivalent of 40 kale plants. A month and a half after planting kale starts-- or collards, chard, mustards or turnips--from Gramlings, assuming adequate sunlight, you should be able to harvest four handfuls of kale per week... until sometime mid-April to early May. That means four handfuls of greens from mid December until May: 4.5 months or roughly 18 weeks. 4 handfuls x 18 weeks = 72 handfuls. Each handful of greens cost about a dollar and a half at Winn Dixie and roughly $3 for organic at New Leaf. So in six months, with one small raised-bed, you potentially can grow $216 worth of greens. That's what I call an economy of kale.)