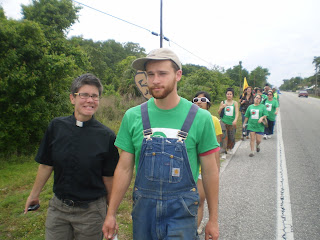 Two weekends ago, I marched with the Coalition of Immokalee Workers (ciw-online.org) in overalls.  They were marching to hold Publix accountable for the supply chain from which they purchase their tomatoes.

Centered in the town of Immokalee, FL, the tomato fields of Florida are home to some of the more blatant injustices of our day.  Folks-- folks I have been getting to know over the past year-- must pick 2.5 tons of tomatoes to earn $50.  In the worst cases-- cases that have been tried and led to prison sentences--farmworkers have been forced to work without pay; they were chained at night to prevent escape.

The thought that keeps returning to me as I consider my weekend marching with farmworkers, students and church allies is this: "How absurd is it that folks who handle thousands of pounds of food a day go hungry on a regular basis?!"

The reason I started Tallahassee Food Gardens was to highlight and work towards a food resilient community, one in which whatever might happen-- we all get to eat-- and eat well at that.

Then, I learned about the tomato supply chain in Florida, about the meager wages paid, the abuses... and  other details.  For example, I learned this past weekend that workers in Immokalee pay between $150-$350 a week for housing.  Don't be mistaken as I was: this is not for a house, apartment or even a room.  This is the cost for a space in a house, a house that is woefully overcrowded with 8 to 12 people.  Add it up: $50 x 5 or 6 days a week = $250-$300.  In order to pay for rent, one must pick 2.5 tons of tomatoes everyday for five or six days a week.  What about clothes?  Shoes?  Food?

The sick irony of Florida's tomato fields is that due to top-down mass purchasing by companies like Publix, McDonalds, Taco Bell, Subway and WalMart, folks who handle our food can hardly purchase any food for themselves.

And so I marched with the Coaltion of Immokalee Workers.  The Coaltion requests Publix sits down with them and the Florida Tomato Growers to form a three-way agreement that will insure farmworkers are paid one more penny per pound.  Not so much to ask, eh?

The Coalition of Immokalee was born in 1995 the night after a young, fifteen-year-old kid had returned from a tomato field brutally beaten.  Nearly dead, a bloodly pulp, the story emerged.  Amidst the hot mid-day sun, he'd asked his crew boss for a break from picking to get some water.  The crew boss retaliated by beating the boy with a stick to within an inch of his life.  That night, the community came together-500 strong.  They marched to the crew-leader's house where they said, "A golpear a ono es golpear a todos." An injury against one is an injury against all.  The next day, not one worker in the town of Immokalee went to the farm of the offending crew boss.  Though some farmworkers had been attempting to organize the coalition before this brutal incident, it was the community's overwhelming response that birthed the spirit of the CIW that lives on today.

If you want to read up more on the CIW's Freedom March, take a look at any of the following articles:

Lastly, here's a video of the CIW Women's Group and children in the April 16-18th Farmworker Freedom March: