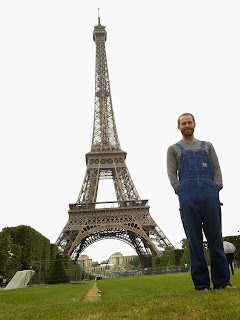 Updated 10/31/2017 as the National Organic Standards Board meets in Jacksonville, FL. This may well be the most important thing you read this year for your health. (Originally written in 2015 while I was traveling-- and eating bread-- with my wife in France.)

I've got a food riddle for you from Paris, France: Why can I eat bread over here when it makes me sick at home?

I'll share my best guess in a minute, but first, a little personal background.

Since my senior year of high school, I've not been able to eat much bread at all. For five years, I was severely hypoglycemic, and everything I ate had to have more protein than carbohydrates. That meant, in effect, that I spent my years of college beer-less and eating lots of salad with meat on top. I ate tons of vegetables, very little fruit, basically no carbohydrates to speak of, meat, nuts, eggs, and cheese. If I accidentally ate, say, meat loaf that was, unbeknownst to me, made with bread in it, I'd spend the next 2-3 days mentally cloudy, depressed, and lacking motivation. It was a health-imposed paleo diet of sorts.

Finally, the year after my college graduation, I learned to manage (and all but eliminate) my hypoglycemia in two ways. First, I took chromium supplements (chromium is an essential micro-nutrient that helps the pancreas regulate its production of insulin) for 8 months. Second, inspired by Michael Pollan's reporting on green vs grain-based food chains, I made sure to eat sufficient sources of omega 3s: sardines, flax, grass-fed meats, and especially loads of green vegetables (sustainably raised on good soils are especially balancing for me).  Though I still do not eat much refined sugar in the form of candies, sweets, or sodas by American standards, at least I can now eat carbohydrate basics like rice and potatoes, fresh fruit, and, well, ice cream from time to time :).

In spite of having learned to dietarily manage my hypoglycemia, your typically, store-bought bread has continued to cause me problems. From constipation and abdominal bloating to hypoglycemic-like low-blood sugar symptoms such as exhaustion and irrational anger, eating bread in the States causes me all kinds of problems.  Dr Li, a Tallahassee acupuncturist (also trained in Western science as an MD physician) says that wheat exacerbates swelling in my low-intestine, which puts pressure on my pancreas and gall bladder. The pancreas is responsible for insulin production, thus the hypoglycemic reaction, and an irritated gall bladder, I hear, is often accompanied by anger. So, you might think that I'm gluten intolerant or otherwise allergic to wheat. 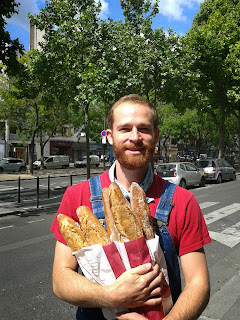 Here is my working hypothesis: In light of the fact that France is very restrictive on GMOs and increasingly on Roundup® (more generally glyphosate, the active ingredient), I'm guessing that the reason I can eat bread in France but not at home is due to RoundUp® residues in US bread. And, I'm guessing I can eat bread made with organic wheat at home because neither GMOs or Roundup® is permissible in USDA Organic foods.

To paint the full picture, let me delve in a little. This is my health (perhaps all of ours) and a $200 billion rabbit hole, so stick with me. Here's what I've learned:
In light of all this, I'm guessing that Roundup® (active ingredient: Glyphosate) residues in conventional US store-bought bread is the reason I can't eat it. The real kicker for this idea came while visiting Switzerland. Within a day or two of being in the country, with no real change in diet (still plenty of good cheese, fresh veggies, fresh bread, and local wine-- just like while in France), my stomach bloated up like I was stuffing myself with white sandwich bread from the USA. Come to find out, Switzerland is more GMO and Roundup® friendly than most countries in Europe. When we left Switzerland, I almost immediately began to feel better.
So, here's my Food Gardening tip of the day: If you have weeds, before you reach for Roundup®, watch my YouTube video about weeding:

Until next time y'all-- happy growing,
Nathan, MIO
Originally posted June 2nd, 2015.
Since the time of publishing, I've learned and put together a few more things:
To close, if you, like me, want to avoid eating probable glyphosate residues, these are the things you'll need to try to avoid: conventional (non-organic)... wheat, barley (yes, beer), sugar, oats, soy (beans, milk, oil), canola (oil) and wine (vineyards control weeds under grape vines with Roundup®).  In the US of A, our grocery stores are, unfortunately, mine-fields of Roundup® residue. And, yes, the alternative, eating organic does costs more...
Unless you grow it yourself.


Step #1 to grow your groceries is to choose a spot for your food garden.  Sign up below for my updates and receive my "How to Pick a Great Garden Spot" for free!


#GrowYourGroceries - I'll help.
- - -
If I can support you in growing your own food in raised beds...
If you'd like to support me...
in freely sharing my stories & expertise, please consider passing along this article to a friend or sharing on social media. Each of my articles take hours of resource gathering, writing, and editing, so I want to make sure they don't just sit on the digital shelf.