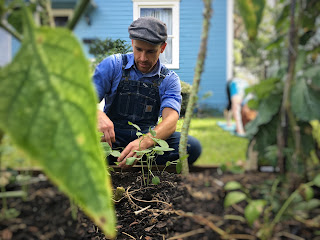 After making sure you've got adequate sunlight, the next two things necessary for food gardening success -- as any kindergartner can tell you-- are good soil and, you guessed it, water. These are your food growing basics: sunlight, soil, and water.

However, before I jump into talking about soil, which I'll do in my next post, let me take a step back. You see, I've realized that I could draft a book by writing it a blog-post at a time. Originally I had conceived this "What You Need To Know To Grow" series as several blog posts about sunlight, soil, and water-- with "sequels" about how to plant, deal with pests, what/when to harvest. Not more than 5-6 posts in total.

But then I thought: rather than stop there, what if I expanded beyond the basics to share my own "bigger picture" perspective that helps ensure my food gardening projects are bountiful & successful in a holistic sense?  ...my secret food gardening recipe so to speak.  And, of course, in keeping with my style, I'd plan to share stories & personal experiences to give you something to anchor the facts onto.  What do you think? Should I do it?

To give you a sneak preview of this possible "What You Need to Know to Grow" book, here's an outline sketch: 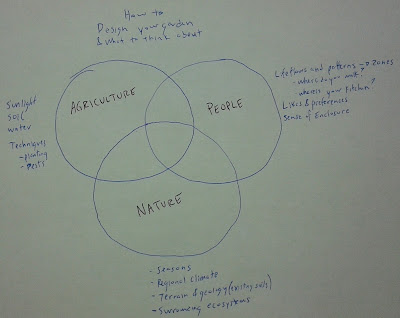 Agriculturally, you need to have sunlight, good soil, and adequate water. It's also helpful, of course, to know the technical basics like how to plant. Regarding nature, at a minimum, you need to plant in season. Also, knowing about your existing soil, adapting your practices to the regional climate & terrain, and attracting beneficial insects will make you more successful and your work easier. Finally, it's essential to consider the people you're trying to engage (even if that's just you). What do they like to eat? Where is the kitchen? Is the food garden space inviting? How easy is it to maintain?

Say you get your grand-kids excited about growing a garden (people), and you were a successful gardener up north (agriculture), so you just do what you did there. But things go wrong: your lettuce gets eaten up by bugs, and your tomatoes yellow and die right before your eyes. What happened!? It turns out the climate and seasons are entirely different in the Deep South compared to the North, so you planted at the wrong time of year. Whoops! You forgot about nature. If on the other hand, say you're a great agriculturalist-- even if you integrate natural principles-- you may end up with an uninviting food garden in the far recesses of your backyard full of produce that no one recognizes or will eat.  And, ultimately, since no one feels any real benefit, it will go neglected, be overtaken with weeds, and then, finally, be mowed to the ground. You forgot to think about people. 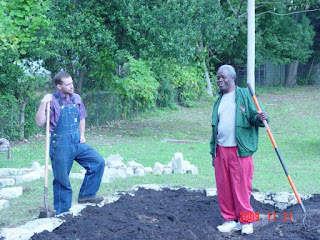 In 2009 right as I launched my food gardening business, I volunteered extensively with a nonprofit to assist a community elder in starting a community garden in a subsidized housing community (in other, less gracious terms, in the "projects"). It was exciting! It was vision of abundance in the midst of a food desert! Tons of kids in the neighborhood- okay, maybe a dozen- came out to join the day we built and planted the garden. In the following weeks, everything grew great because the team of day-of volunteers had brought in great compost, planted things in season, and we kept things well watered in the weeks that followed. 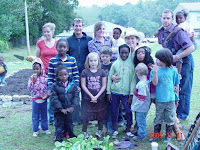 However, after that initial build day (and one more when volunteers planted a bunch of fruit trees), very few people were involved other than Mr. Oliver and I. A few kids ventured over to join us when we were pulling weeds from time to time, but generally it was just the two of us. I got to know folks in the neighborhood hoping to find and cultivate interest in participating, but they saw the garden as "Old Man Oliver's Garden."  As the red chard grew one foot then two feet tall and the spinach plants were beautifully abundant (but no one touched or harvested any of it), I started asking friends in the neighborhood if they wanted some of the produce. "Oh, chard, you say? Oh, that's what that is. I've been wondering. Never heard of it. It's like spinach you say? What's spinach? ...Why don't y'all grow some things that people around here know? Like collard greens and mustards."

I share this story because it's an oft repeated story in the community gardening world. Between us volunteers, we had the agricultural knowledge, and we worked with nature so far as growing in season and planting flowers that attracted beneficial insects. We also had lots of "one-time" volunteers, but the most important people, the community residents themselves had not been considered, consulted, or engaged from the beginning, so the success of the whole community garden project was compromised. (Don't worry. It wasn't a complete "failure," but it certainly wasn't as successful as it could or should have been.)

It takes all three (agricultural best practices, natural systems and cycles, and engaging people "where they're at") to make for a successful food garden project -- be it a community or school garden, an edible landscape, or simply a raised bed or a patio container garden. Like a fire which requires heat, fuel, and air, a food garden can't be wonderfully successful over the long term without paying attention to all three of these key elements: ag, nature, and people.

Next up, let's talk about soil. 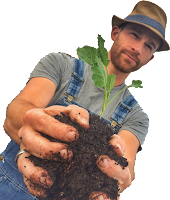