Your cart
My buddy, John is always chiding me because-- though I wear overalls-- when it comes to sunrise, I am no farmer.  My cousin's boyfriend jubilantly, regularly, invites me to join his "crack-of-noon" club.  Well, I daresay, I'm not that late of a sleeper, but when Jason, who works at Tallahassee Nurseries told me last week that he woke every morning at five so he could get up, drink coffee, greet the day, read, walk his dog, etc... both my mouth and eyes opened involuntarily, and without thinking, I whispered, "Wow."

So, with that grain of salt, I'll go on to tell you that first thing yesterday morning, John and I-- John, my buddy who's running around with me for the month to learn about soil, seeds, and growing food-- we loaded up the truck with tools and compost.  Then, following Sandra Wilton, a fellow gardener and friend we headed to Romac for lumber.  We planned to install a raised-bed garden at the Midway Head Start so the kids-- in Sandra's words, "Can learn where their food comes from."  Apparently, last week when she was there doing speech therapy with some of the kids, one of the little girls was talking about mushrooms. "They're gross!" she said, "They grow on the ground!"  It wasn't much use when Sandra explained that most food grows in, on or out of the ground.  The kids insisted that, nah, food comes from Momma.  And Momma gets it from the store.

And so we built a raised-bed garden immediately adjacent to the little-ones' playground.  After filling it with compost a couple little people came out to join us to plant.  Paris, Dorian, and Shiloh.  For starters today, we planted radish seeds, regular and purple cabbage and brussels sprouts.  Just before planting the purple cabbage, I asked, "Who wants to help plant the purple cabbage?"  All three of them came running around the bed shouting, "I do," "I do," "I do," "I like purple," "I LIKE purple" and "I like purple; it's my favorite."  With so much interest in purple cabbage, I asked, "Do you like purple sweaters?"  The all said yes.  Then I asked about purple mustard greens.  Yeses again.  Finally, I questioned, "Do you like... purple sunshine?"  They were on a roll.  "Yeah!" they said, "I love purple sunshine."

If you see any of that, let me know so I can take it back to the Head Start in Midway.  Meanwhile, Sandra is going to be the primary coordinator for the garden, and, if it works out, another friend, Katie Harris is going to help with the garden from time to time-- not to mention the Head Start teachers who expressed interest and willingness to help maintain the new garden.

In the afternoon, my neighbor Heather Gamper, who's super involved with the Apalachee Beekeepers Association brought me a hive of bees.  (The Association is actually having a short-course on Saturday, Feb 27th, so if your interested, click here.)  Last year I suffered pitiful pollination of my apple trees: hundreds of blossoms and not one fruit.  So, we set up a deal: I give Heather free vegetables, and she's going to help me maintain a hive in my yard.  Amazing.  Plus, with these kids workshops going on, I figured we could all learn about the importance of pollinators (from a distance, of course).

In the ater afternoon, I renovated a different neighbor's garden.  She'd had the compost delivered previously, she just wanted some timbers and some muscle to move all that compost.  Her new garden is 8x14ft.

And what else?  Calamondin marmalade.  Well, first, I've got to share a little story of yet another set of neighbors.  On Monday, John and I took a walk around the neighborhood.  We stopped in front of a house because we noticed what we thought was a giant kumquat tree growing in someone's backyard.  John and I stood there glancing back and forth at the tree (directly behind and just above the house) and talking with each other.  Meanwhile, a woman appeared in her kitchen window where she was preparing dinner.  She looked out at what appeared to be two young men scoping out her house.  Turns out, there's been a rash of home robberies in our neighborhood, so folks are on the lookout.  "Well," I told John, "we've got to go talk to them now."

Her husband opened the door before we knocked, suspicion in his eyes.  "Hey there, uh, good evening, my name is Nathan.  This is my buddy John.  I live just around the corner, we were looking at your kumquat tree in your backyard... I wonder, do y'all pick and eat them all or is it possible that we could have some?"  "Kumquats huh?" he responded.  "Is that what you think they are?  They're really sour."  Oh, I thought, must be the sour variety.  "Sure... What'd you say your name was?  Where do you live again?"  He went on and on about how sour they are as he led us into the backyard, and I thought, "poor soul, you don't know."  "Yeah," he continued, "we don't do anything with them.  Truth is, they're just a mess so far as were concerned."

About that time we'd reached the tree, and I tried one.  Wow.  This was no kumquat.  Wow.  Sour.  Black-out-gag and wish for mercy sour.  It's been four days, and my mouth still waters when I think of that first fruit.  Know that knot that forms in your jaw when you eat something sour?  Know how your stomach holds stomach acid?  This thing gave me a knot in my stomach for an hour.  That's the kind of sour I'm writing about.  But, what was it?

In the meantime, we'd gotten ourselves into it, promised to come back with our ladder, climbed the roof, picked it bare and told Bill that we'd try to make somekind of marmalade out of the "stuff."

Calamondins.  We looked them up on the Just Fruits webpage.

And yes, we made marmalade.  It turned out great.  John and I canned it up this evening, 27 jars in total.  We'll be taking some jars back to Bill and his wife for their generosity.  Here's a picture: 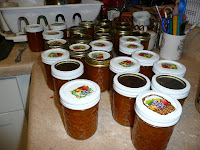 I'll leave you with a few additional links about the food movement sweeping the country.