Your cart
My mother grew up in Jackson County on a small farm.  Her family grew cotton, corn, and peanuts like everyone around them.  Unable to pay the mortgage, her family planted crops in the spring; laid them by; headed to Michigan for the summer to pick cheeries, strawberries, peaches and the like before returning to harvest their crops in north Florida.  With the onset of winter, the family loaded up for a temporary move to south Florida to harvest citrus before coming back to north Florida in the springtime to repeat the process.

I was raised by a farmworker who taught me to identify with folks tending our food, to recognize the skill and ceaseless work necessary to grow and harvest the groceries we can easily take for granted.

I was raised in a faith that is rooted in the cries of the enslaved Israelite people who were expected to make bricks without straw. From an early age, I heard words such as, "In Christ there is neither slave nor free...." 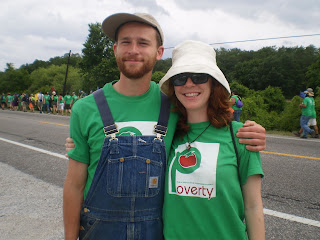 It is with such a background that my wife & I stand in support of the Coalition of Immokalee Workers as they fast to encourage Publix to hold their tomato suppliers accountable for poor (i.e. outrageous) labor practices in Florida's fields, not least of which is modern-day slavery.  The coalition asks that Publix enter a three-way agreement with them and Florida growers to pay 1 penny more per pound for tomatoes that will deliver farmworkers the first wage increase they've seen since the 1970's.  Instead of 1.5 cents, they'll be paid 2.5 cents for each pound of tomatoes they pick.

I'll be passing up lunch this week to honor the CIW's dedication to just food. Learn about their campaign here.
Share Share on Facebook
← Back to MAN IN OVERALLS