Your cart
Folks, the food movement is growing quickly in Tallahassee; however it is not root-bound within our home town. A few years back, I read a book named Emergence: The Connected Lives of Ants, Brains, Cities, and Software by Steven Johnson. It's about how semi-connected individuals can work together as a coherent whole; the system can and usually displays an "intelligence" greater than that held by the component pieces and a productivity greater than the sum of its parts. In this light, think about yourself... or even all of us in Tallahassee who are "experimenting" with and "just beginning to" food garden. At first glance, it seems we are all fumbling with pests and heat and humidity beyond our abilities. Most food gardeners I talk to comment upon how they're not growing "that much." But, if we take a step back and look at the entirety of the city... or the country (or the world for that matter) we begin to gain a sense of the great abundance of front-yard, back-allyway, raised-bed, and small-farm food we're producing. We can also come to appreciate the way in which we are re-creating our food systems through our localized and modest actions.

To gain a sense of the food movement beyond Tallahassee, I've included a few Youtube videos below:

This first video is a look at Growing Power, an incredible nonprofit in Milwaukee striving to inspire "communities to build sustainable food systems that are equitable and ecologically sound, creating a just world, one food-secure community at a time."

Here's another Growing Power video that features Growing Power's CEO, Will Allen, a retired NBA star who was the recipient of the 2008 MacArthur Genius Award. "It is my belief," he says, "that everybody-- regardless of their economic means-- should have access to the same healthy, safe, affordable food that's grown naturally...."

This next video highlights Urban Farming, an organization that started in Detroit with three gardens. By 2008, they had the "equivalent" of 600 gardens planted across the country and abroad providing fresh produce for an estimated 50,000 people.
According to their website, their mission is to "end hunger in our generation."

The following video overviews the work of The Food Project in Boston. The narrator informs, "We farm with teenagers. We grow over 250,000 pounds of produce each year. We distribute that food in and around Boston to hunger relief organizations, to farmers' markets in low-income communities, and through our community support agriculture program."

The Food Project's mission is to "grow a thoughtful and productive community of youth and adults from diverse backgrounds who work together to build a sustainable food system."

~By the way, I know an impressive lady in the Tallahassee area with dreams-- and the necessary land-- to re-create something like Boston's Food Project here in north Florida. If you're interested send me an email, and I can put you in touch with her. (maninoveralls at gmail dot com).

The food movement is endless, and it's not all up north either: 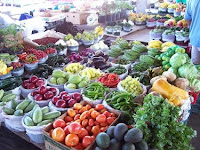 What follows are a handful of videos about the work of Urban Harvest, a nonprofit in Houston. Their programs involve food gardening education, organizing community gardens, and coordinating farmers' markets. To gain a sense of their impact, take a look at this map of Urban Harvest sponsored community and school gardens. There are over forty of them scattered all over the Houston.

The emerging food movement is not confined to the States either. Globally, according to a CBC news cast about urban agriculture, "there are an estimated 800 million urban farmers, and they produce about 15% of the world's food." Whoa.

The Tallahassee food movement, therefore, is part of something emerging all over the world. So, with Rosy the Riviter cheering, "We can grow food!" let's follow the words of my friend who mis-quoted Plato as saying: "Grow Your Own Food and Share It."


PS- the work and ideas of the above organizations are expressed to some degree through our local Damayan Garden Project here in Tallahassee. I encourage you to investigate, support, and further their work in our community. Of course, Damayan, like any nonprofit organization, appreciates volunteers and funding from time to time. Another way to support their work is to chat-up or otherwise publicize their name... especially with folks interested in starting community and/or educational gardens as those are Damayan's specialty. ("Damayan" is a Philipino word that, as I understand it, means "the way in which you seek to remedy your own hunger, so should you seek to remedy the hunger of others." Or, in other words, "feed others as you would feed yourself" with a golden-rule slant to it.) Want to make a youtube video for Damayan? Email me. maninoveralls at gmail dot com.
Share Share on Facebook
← Back to MAN IN OVERALLS