Your cart
Last June, I got an email from Marcy Rosner, a native of Tallahassee that had been-- for a handful of years-- living in Oakland.  She was back home for the month and hoped to find some volunteer opportunities with community gardens or some other volunteer urban ag project in Tallahassee.  Eventually she linked up with Shelby Stec, an awesome FSU student that coordinates a garden at the Salvation Army on Jackson Bluff.

Last week, the day before catching a plane for the Bay area (for a visit to see my sister, Kelley), I sent Marcy my own email.  I'd been hearing reports about all kinds of food movement work in Oakland like this YES! Magazine article featuring the work of Urban Tilth.  I'd also heard stories about People's Grocery from Marcy, and, via Farm City, a book by Novella Carpenter, I'd heard about City Slicker Farms.  I hoped to see a bit of what's going on in Oakland with reference to the food movement and to catch a few stories. 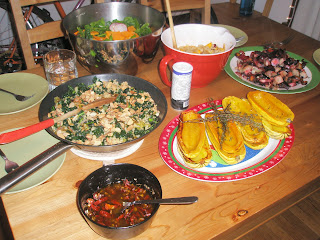 Marcy invited me over to prepare and eat a meal with her roommate, Raquel, and her "Food Justice Homie, Marcelo."  We started by heading for the farmers' market in Berkeley, which they said was "the most expensive market around" because of its proximity to the "foodie ghetto" where restaurants like Alice Water's Chez Panisse are located in great plenty.  The prices, however-- for local, organic produce-- was about half that of Tallahassee's equivalent.  It felt like paradise.  The resulting meal-- Yum!-- was to die for.  Oven roasted root vegetable medley seasoned with fresh garlic and dill (beets, purple carrots, turnips, onion).  Fresh kale with garlic in orzo. Winter squash baked with Thyme and olive oil.  Fresh arugula-spinach salad with ripe persimmons, red onions with homemade balsamic/garlic/lime dressing.  And what else?  Fresh bread and local olive oil for dipping.

At the close of the meal, I confessed, "You know one of my favorite things about the food movement?"  My fellow eaters played along, "What's that?"  "That right there," I pointed to the table, "eating a meal like that is a direct action, a means of participating in the movement.  I love that!"

In addition to eating, I learned a lot about the "Food Justice Movement" in Oakland via Marcelo's stories.  A graduate-- like Marcy-- from the Ethnic Studies Dept at UC Berkeley, he is now pursuing his PhD looking at the ways in which WWII industry-induced migration changed the racial-ethnic composition of Oakland.  In years past, he was employed by People's Grocery.  Though no longer on the payroll, he continues to volunteer while also serving on the board of Planting Justice, another Oakland Food Justice organization that emphasizes Permaculture.

On Sunday, we took a look around Oakland.  Though it was raining, we were able to visit People's Grocery's non profit head quarters; the People's Grocery's California Hotel Urban Farm; DeFremery Park (one of the locations where People's Grocery distributes their Grub Boxes.  Interestingly, DeFremery park is also one of the historic sites whereat the Black Panther Party once served breakfast to hungry kids every morning, free of charge, which roots Oakland's current work in previous efforts);  Mandela Foods Co-Op (which is currently, according to Marcelo, the only grocery store in Oakland's city limits.  I.e., Oakland is a food desert.); lastly, we visited a new City Slicker Farms location within an Oakland city park.

Marcelo spoke repeatedly of Oakland's "movement culture,"its "shared movement spaces," and about Oakland's "Food Justice Movement."  The dynamism alive in Oakland is more than a handful of innovative urban agriculture, (healthy) "food-security," and sustainability focused "food resilience" efforts that happen to be taking place in the same city.  Instead, the many (MANY!) organizations and efforts complement one another.  For instance, OBUGs (Oakland Based Urban Gardens), as Marcelo shared, has a great relationship with the school system, so if someone comes along hoping to work with grade students, folks send them to OBUG's.  Additionally, the many projects are interconnected and mutually supportive.  Marcelo himself is exemplary: former employee of People's Grocery, board member of Planting Justice, co-op member at Mandela Foods, friends with staff at City Slicker Farms, mentoree of an Urban Ag professor at Berkeley, linked with leaders at Urban Tilth, part of a "New Narratives" Bay Localize! Working Group, etc.

If you do a little clicking around on these Oakland based organization and business websites that I heard reference to and/or saw, you'll get an idea of the networked nature of the Oakland Food Justice Movement:

As People's Grocery's slogan captures, Oakland is engaged in a dynamic movement to ensure "Healthy food for all."

Lest we lose ourselve thinking about Oakland's example, it's good to keep in mind that we are well on our way here in Tallahassee.  Though most organizations and associations are not registered nonprofits, we have our own networked hub of urban ag/healthy food/food justice/food-security/community food resilience here at home: