Your cart
This past week I was in Oakland for the 15th annual conference of the Community Food Security Coalition.  With the Oakland's rich history of food justice work rooted in the Black Panther's Free Breakfast for School Children Program (that gave rise to the nation-wide free and reduced lunch programs), the Occupy Oakland movement centered just around the corner, and a gathering of 1100 folks from across the country and world all working amidst the food movement, the stage was set for a dynamic conference.

But how do I tell the story of a movement meeting itself? Of 1100 workers in the food movement-- a microcosm of the global good-food system-- in the same place sharing stories, successes, challenges, models, and dreams?  Can I capture the dynamic via lists and links of represented organizations?

If nothing else, I've got to discuss Food Sovereignty.  It was an oft repeated phrase at the conference.  As Malik Yakini from Detroit pointed out, "Food Security isn't enough... You can be food secure in jail.... The goal is not just to be a well fed slave but to control our food system." The issue is control.  In spite of the best intentions of the industrial food system and those who control it, if our food system is controlled by an ever smaller pool of food conglomerates (as it currently is: 84% of pork processing is done by the top four companies, 70%+ of beef, and over 50% of corn is all controlled by the top four companies), a small change in the board room can result in hungry, malnourished or obese communities at the local level.  Some even go as far as to say that the corporate food system is waging a "low intensity war" against local communities that is resulting in life-expectancies for children that are shorter than their parents due to chronic, diet-related diseases.

The food sovereignty conversation took on a different dynamic when addressed by those from the global south, like the MST of Brazil, (global) La Via Campesia, Frente Nacional de Resistencia Popular (Honduras), (Kenya-based) G-BIACK and the Movimiento Campesino a Campesino (in Mexico). The stories held a common strand: indigenous communities who had farmed and fed their families for generations, centuries.  Amidst nationalistic efforts to "develop," "modernize," and "liberalize" their countries and economies, national leaders created laws requiring private-property deeds for all land, nation-wide.  Unaware of such laws, the peasant farmers of the world continued to farm and feed their families; meanwhile those privy to the bureaucratic loop (chiefly transnational corporations and the wealthiest of, for instance, Honduran families) hired deed writers and lawyers.  In the shadows of legality, deeds were created and sold to those who could pay, sometimes resulting in 2,3,4, 8 or more deeds for the same piece of land.  Those with access to money and lawyers won the resulting court cases.  With the endorsement of law and the aid of public (sometimes private) police and military, subsistance farmers became landless farmers.  Sadly, such economic indicators such as GDP grew via speculative sales of property thus misrepresenting the state of general welfare.  In such situations, food sovereignty is directly tied to the dispossession and speculative buying and selling of land, to the means and methods of supplying one's communities with food. --

A growing response is that of the MST who "organizes non-violent occupations of unproductive lands in order to [secure land for] the rural poor." They argue, our fundamental right to feed ourselves supersedes an absentee-landlord's right to private property.  The rules are not working-- to the detriment of the vast majority-- so they're re-writing the rules.  Food Sovereignty.  Powerful stuff.
How about a few anecdotes: La Via Campesina which is a peasant farmer organization boasting 300 million members worldwide and their principles of Food Sovereignty; There's a 14-acre Urban Farm Coop in South Central LA that is in a struggle with the city to get their land back after their farm was bulldozed several years ago to build a warehouse. (Cool fact: their urban community farm lead to a 78% reduction in crime in the area. After they raised property values via crime-reduction, the city attempted to sell the land out from under them.) Check out: YouthFoodBillofRights.org. And the Detroit Black Community Food Security Network, Windy City Harvest, the Sustainable Prisons Project, or Youth Grow are also awesome.  If the Occupy Movements have caught your eye recently, then perhaps you'd be interested in the MST of Brazil (i.e., the Movimiento Dos Trabalhadores Rurais Sem Terra) which has occupied something on the order of 300,000 acres in order that poor, landless farmers (landless primarily because their indigenous land was swindled from under them) can provide for their families.

I met so many dynamic folks doing amazing work.  Below are the materials I brought home, and below that is a list of amazing organizations. 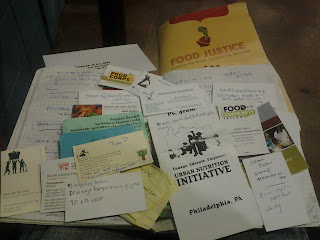