Your cart
Before I get around to that, let me say it was a sunny, crisp and convivial Thanksgiving. My family and two visiting friends ate on the picnic table out front in the garden. The table sagged under the weight of food. Okay, that's a lie. It was, however, loaded. Loaded. Chicken--not turkey-- I daresay, marinated with rosemary, thyme, oregano and homemade white wine, all from the garden. Rosemary flavored sweet potatoes with black beans seasoned with peppers, onions and chilies. Mashed turnips. A mess of collard greens, southern style. Mustard greens, vegetarian with soy sauce. An egg-fritatta with onions, kale and beet greens. Did I mention that everything listed thus far was from the garden save the chicken, beans and onions? (The eggs for the fritatta came from a chicken-raising neighbor the next street over.) And, of course, there was stuffing and cornbread and cranberries, and only God-knows what else, but as-sure-as-I'm-alive, I ate it.

Here's a picture of a few veggies I picked the night before Thanksgiving to prepare. (Plus some honey from a neighbor up the street.) 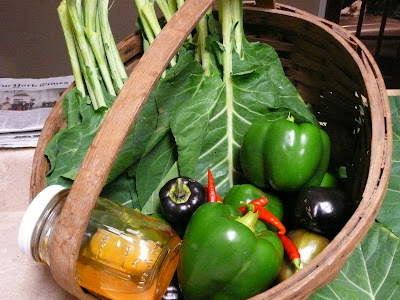 So, did I ever tell you about the night someone broke into my truck?

After a hard day of, uh... eating, eating and then eating homemade apple-blackberry crisp and pumpkin pie, I sat up late talking with two friends, Geoffrey and Martha. They were sharing their plans to marry and farm in Wisconsin just across the hayfield from where Geoffrey grew up. Additionally, they spoke of their dreams to start a 50 to 100 member vegetable CSA with additional enterprises springing up around the edges such as might include goats and homemade soaps and knitted washclothes and dexter cattle and draft (animal) traction. As I listened to their visions, I suddenly heard a bump outside.

At first I thought it was our cats, but it sounded like a bucket being kicked... plus both our cats were inside. As there has been a rash of neighborhood car break-ins lately, I figured it was worth a look.

As soon as I cracked the front door and the flicked the lights on, I saw there was a guy running alongside (his) bike away, up my driveway. When he reached the road, he lept on his bike.

And I took off! "Hey! Hey man. Hey!" I yelled. He called back, "I didn't take it. I didn't get anything." Course, he was on a bike, so I was outmatched from the start. Nonetheless, at 12:30AM, barefoot, reaching in my pocket for the cellphone to call the cops, I bolted. For two and a half blocks I chased, but finally he passed out of sight over the next hill, and I stopped to gain my breath so I could talk to the dispatcher without panting.

The frustrating thing was, what I actually wanted to do was talk to the guy. He was about my age. In a weird way of looking at it, he was knocking on my door, and apparently, he was hungry or needy. (Why else would he be looking through the change-tray of my beat-up, old truck?) And, like I mentioned, we had tons of Thanksgiving food, loads of leftovers. Additionally, I know something about growing food, so just perhaps, within a few months, we could set him up with a garden of his own somewhere. Alas.

Instead of "Good evening. How's it going? Want some mashed turnips? How about roasted chicken and cranberry sauce? Or, tell-you-what, I've also got some soul-warming southern collard greens and cornbread.... What da ya say?" all that got out was: "Hey! Hey man! Hey!"

I daresay the words eluded me. I'm gonna have to work on being more articulate.

Well, a few minutes later the police showed up. I offered the best description I could muster: "Guy about my size. In a hoodie. On a bike. Real fast." One of the officers zipped off to look and the other gave me a ride back to my house. In the driveway, the officer took down my information for back-reference: name, date of birth, etc. Finally, the officer, she asked me, "So, do you have a job? You work?"

"What's your line of work?" she questions.

"Okay," she processes offhandedly, "So, when I need some yard work done, I'll give you a call?"

"A food garden?" she looked up quizzically.

"Really? Because," she lights up, interested, "What I've been wanting is an herb garden."

As she continued telling me about how she wanted a little herb garden and all about her grand-mother who used to work medicine with "every kind of herb" and bark and roots and flowers and leaves, I pointed to my own raised herb garden in the beam of the squad-car headlights.

After we compared more grand-mother stories, just as the other patrol pulled into the top of my driveway, she said, "Yeah. I'm gonna have to give you a call."

My life is so wierd. Folks, really. I wear overalls. In the 21st century. In the city. I farm in the suburbs. I start gardens all over town. I stand beside the road with signs that say things like, "Grow Your Own Food and Share It."

And at 1 O'clock in the morning just after someone broke into my truck, I talked food gardens with the police, and it turns out Officer Abney wants my help to start an herb garden.

And for this, for all these things, I'm thankful.