Your cart
In partnership with a group of young folks in Frenchtown calling themselves iGrow, I'm increasingly exploring urban farm possibilities. 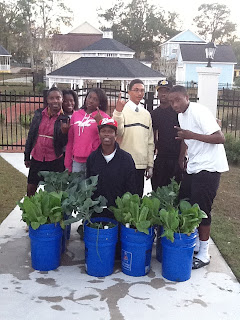 Amidst the conversation, we've been talking about "starting the first urban farm in Tallahassee."  Well, goodness.  What's that phrase?  "There's nothing new under the sun." Something like that.  The idea of "starting something" or "being the first at something" sounds so cool.  It offers a legitimacy, a sense of "originalness" that's appealing, but too often in claiming such statuses, we-- whether intentionally or unintentionally--tread on those who came before us.  Such was our mistake, my mistake, really.

It's silly, really, that'd I'd blunder with such language.  There are, of course, the farmer/gardeners at the FAMU Community Garden who have been raising food for 35+ years.  Since the beginning of my foray into the food movement-- indeed most of my life-- I've been aware of the FAMU growers.  I also have friends with urban ag gigs on 6th ave, at Salvation Army on Jackson Bluff, and tucked away on Paul Russel near Richards high school.  Why this didn't put a stop to my saying "first urban farm" with the iGrow youth, I'm not sure.  But I'll tell you what did cause me to stand-corrected.

A few weeks back, Wendell, my co-worker and I were cutting through NW Frenchtown on the way to High Road north of Tharp.  Tucked away, a turn here, a turn there, another turn, seemed like we were driving in circles; we happened upon two giant gardens-- urban farms if I ever saw them-- in the northern heart of greater Frenchtown.

After seeing the farms, I got to asking around.  Mr Bellamy, president of the Frenchtown Neighborhood Improvement Association and Ms Mitchell, Executive Director of the Frenchtown Revitalization Council -- both partners and mentors amidst the Tallahassee Food Network-- said "Ed Duffee. One of them's Ed Duffee."  This past Tuesday, riding with Mr Bellamy, I got the privilege of meeting Mr Duffee who's been growing on the space for 20-30 years.  He inherited his farm space from an uncle, about 1/2 acre, who had been farming it before that for who knows how long. (As an aside, you should know that Mr Duffee was Tallahassee's first black lawyer.)

He's got mustards and collards growing; his sugar cane-- though already harvested and pressed into syrup-- keeps trying to grow back up.  Over the summer, he had tomatoes, sweet potatoes, peppers, egg plant, and all manner of other stuff growing including potatoes in 5-gallon buckets because Mr Duffee says it makes harvest easier.  He sold some stuff at the Frenchtown Farmers' Market this past summer, primarily tomatoes, which is the reason we were there: Mr Bellamy wanted to make early contact with Mr Duffee to make sure he'd be up for selling again next year.  Mr Duffee told us that he gives most of his stuff away to seniors across the street at Miracle Hill a nursing home, but, yes, he's willing to come to the farmers' market again when it starts back in March.

(While I was there, Mr Bellamy and Mr Duffee got me thinking a lot about Food sovereignty: theirs is a story of a local grower, growing regional produce, selling at a neighborhood market to the adjacent community, a local market that was/is organized by indigenous leaders).

So, the upshot of it is that the iGrow Youth-- though still noteworthy that as high schoolers they're exploring urban farming from an entrepreneur angle-- will in no way start the "first" urban farm in Tallahassee (if they do indeed choose to pursue a market farm venture).  Given Mr Duffee and his Uncle before him-- when you add on the Victory Gardens before that and the Liberty Gardens before that-- my best hunch is that farming and food production has been part of the mosaic of Tallahassee since it's founding in 1824, maintained as a living tradition by folks like Mr Duffee.

That same day, Mr Bellamy and I stopped in on Ms Washington who's got a gorgeous garden in her back yard on 7th Ave.  Neither Mr Bellamy or I knew her. 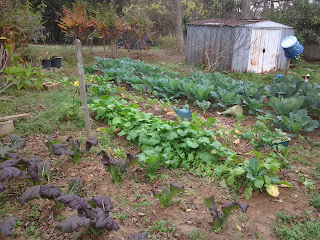 Purple mustards (Mr Bellamy's new favorite), turnips, collards, cabbage, onions, grapefruit, tangerines, she pointed everything out.  "I just like trying things she said."  She's been gardening her whole life.  Turns out she's the mother of my mother's co-worker.  Small world.  When I came around the side of the truck, she hollered from her front porch, "Have I seen you on the computer? My daughter's Gloria; she works with your momma at the hospital; you baked her cookies when you were just a young'in."

Take a look.  Couple cool things worth clicking at:
Grow Gainesville. A seed library in Gainesville gets started.
(Did I mention that both Mr Duffee and Ms Washington are seed savers?)

Fredando Jackson-- from Koinonea Farms, which is the community that gave rise to Habitat for Humanity-- has been in touch about spreading "my model" of food gardening education and support to Americus, GA. Was quite honored by the call; we're going to be working to develop a bare-bones approach to enable as many folks as possible (youth, churches, communities) to get into growing food.